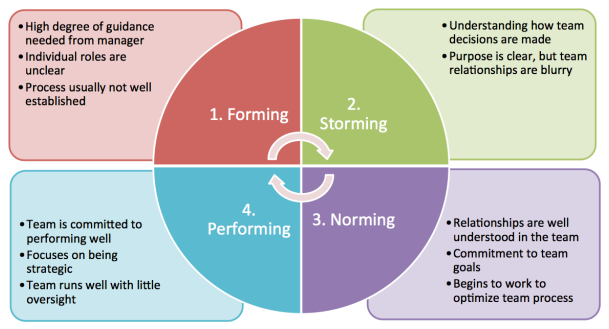 The team building activity is the discussion or debate on the importance of cultural diversity in a particular team in a workplace and the team building activity involves active participation among the team members. In this reflective report, team dynamics as per Tuckman’s Model and analysis of team members’ behaviour will be discussed and recommendations will be provided to improve team dynamics.

Discussion on team dynamics and roles

I think EQ is the direct link between what people think or feel and what they actually do in the real life or at work. The connection among one’s feelings and doings are termed as the basics of EQ. It is to be noted that emotions often direct major decisions in life which may be right or wrong (Zhang, Cao & Wang, 2018). I think most of the team members in the team have used their EQ while discussing the particular topic and presenting their own opinion. However, I have noticed that during certain controversial discussions, few of the team members were unable to control their emotions which resulted in a lot of arguments. I think EQ involves a set of skills such as perceiving, understanding, reasoning, expressing and managing one’s emotions which I feel needs to be utilised in times of any discussion.

Gallup strengths is one of important tests which expresses the true strengths one has and I feel as it is useful for identifying the individual team member strengths in the end. However, Gallup strengths provide unique results so that no two persons may share the same results or talents (Mysirlaki & Paraskeva, 2020). I think the one who started the group discussion is one with more leadership capabilities as that person led the entire team into the discussion gradually. I believe that the person experienced in several leadership domains such as transformational leadership has the appropriate strengths and psychology to lead the team while guiding other team members towards the ultimate outcome.

On the contrary, I also realized that the cultural intelligence of the team was not as effective as expected even though it was not able to establish proper discussion culture in the group. Moreover, I may assert that I faced many problems due to cultural diversity and cultural conflict is one of the serious issues which have created a negative impact on my effectiveness in the team building activity.

I think there are several challenges involved in a workplace which is full of a Volatile, Uncertain, Complex and Ambiguous (VUCA) environment and one needs to have certain VUCA skills in order to be successful in such a workplace. Moreover, during the team discussion I felt that few of the team members have not understood the importance of working effectively in a VUCA environment as their VUCA skills needed to be developed. I also believe that I tried to perform as per the environment, however, I personally identified that there are areas for further improvement in myself to become free of any biases or stereotypes. I may assert that the person with the most diversified and open mindset needs to take the leadership roles in team building activity so that everyone may express their opinions freely without biases.

On the contrary, I may argue that the collective behaviour of the group did not positively address cultural problems and differences in opinion so that it has created a negative effect on the effectiveness of the group. I believe there was a lack of communication skills in the team which was not able to mitigate these issues and resulted in a negative effect on the performance of team members. However, I think that in spite of differences of opinions during the group debate, all the team members at least tried to respect each other and not harm anyone emotionally. On the other hand, I believe that the team members need to build proper communication skills which will definitely help the group to mitigate cultural conflict in itself. Moreover, I feel that everyone in the group has tried to take responsibility for their own and cooperate when required to build a proper healthy group culture that will enhance the performance of the group. In addition to that, I may note that the group leader tracked the overall behaviour of the group which made the group collaboration so much easier. Moreover, I realize that the management of the group was not able to track the individual behaviour of members which was the main reason for the ineffectiveness of debate. Healthy group culture has a great influence on the proper presentation of opinions in the group debate while any kind of stereotypes makes the discussion culture unhealthy (Leonidou et al., 2019).

Discussion of the Tuckman’s model

During the forming stage, the group leader had to take major responsibilities of bringing all the team members at one single place while making the team roles and responsibilities clear to individual team members. I feel that forming is important as it involves a critical understanding process of individuals as all the members are culturally unaware of each other. I think there are huge possibilities of conflict during the forming stage as group dynamics are not set and the leader is also new to the team members where EQ is not evolved.

In the storming stage, I believe the team leader has taken the sole responsibility of taking the ultimate decision with everyone’s consent while the purpose has been made clear. In the storming stage, the roles are clarified among the team members who slightly make the process much swifter. On the contrary, I feel that since individual relationships are still blurry in nature, there are rooms for behavioural conflicts including cultural biases and stereotyping attitudes.

I may state that during the norming stage, individuals are satisfied with the group relationships as the members are aware of each other’s boundaries and are working together towards the goals. In my group, the team members have collaborated with each other during discussion and everyone was aware of the ultimate outcome of the team building activity. Everyone was optimising team processes to achieve our team goals and presenting their own valid opinions (Guttenberg, 2020).

According to me, the performing stage in our group involved the strategic performance of the team where the team is committed towards achieving the team goals and efficient communication process. The team leader finds proper structure in the team and slight monitoring is needed to ensure the team is going towards superior performance (Billstein et al., 2021).

Learning from self capacity to contribute effectively to the team

On the other hand, I also believed that strong team bonding always helps to enhance the productivity of a group while I have witnessed that the team bonding in my group was poor which has created a negative impression on a personal level. Furthermore, I also realized that the leader of the group wanted to make a strong team which motivated and encouraged the members to perform better in a challenging situation. On the contrary, I believe that team member engagement plays a crucial role in the development of the team dynamics while I have found that there was significant use of EQ and VUCA skills in team engagement in the group which has created a positive effect on the image of the group. Additionally, I also feel that proper strategies in the team are extremely needed to increase member participation and welcome individual contribution. On the other hand, I may state that the leadership of the team did not take any proper initiative to mitigate the communication barrier between the conflicting team members of the group. The communication barrier in a team building activity is extremely harmful to the success of the team although it has been observed that there was a lack of communication skills in the overall team (Gola & Martin, 2020).

Recommendation for improving the team or contribution to the team

The recommendations for improving the team or my contribution to the team are as follows:-

Finally, I may conclude that the group as a whole and team members need to care for all other members which will motivate and encourage them to perform better. In addition to that, I may opine that the leaders of the group or team need to give positive feedback to the members while positive feedback is extremely important for an individual which will enhance the productivity of the overall team.