Image classification is a method of classifying various kinds of images into different classes or groups in order to identify those images very easily. This classification of images can be used in different sectors for easy understanding of the situation and how they can be implemented for performing the required analysis and solving any critical problem which is mainly involved with image or picture. Now image classification is a complex task that cannot be taken as easy as it is thought in many cases.

The image classification concept can be applied in different cases to understand the types of various images that are taken in the datasets (Kayabası and M 2017). Mainly the classification of images can be treated as a mapping technique that is used to map the data from input to output. The input is a set of numeric data, and the output is the symbol, or it may be vice versa.

It has the main importance in case of identification of the images of signatures made by different people, in order to understand the nature of a facial expression of a human being, to understand the height of different persons and so on. Now the classification operation is to be performed very carefully based on the characteristics of those images.

This operation provides the users for getting the reliability of the data that can be extracted from the image data. Now for performing the overall classification operation, a detailed analysis is required. This analysis will be very important, and it will be critical.

Now the main problem is that which classification method can be chosen for perfect classification operation depends on the nature of the problem that has been addressed here, complexity of the images and so on.

ANN or the neural network-based classification is one of the most critical and popularly applied methods for successfully classifying various types of images. SVM or the support vector machine is another method that can be applied for classification of images.

Now there are several advantages as well as disadvantages between the various techniques that are used mainly for performing the classification operation of images.

If three consecutive methods can be taken for initiating the classification operation, then the SVM can be taken in the top as due to its higher advantages due to high level of impact on the perfect image classification. This method has the only advantage that it can be applied very efficiently in case of complicated situations where all the images are not specified as easily as possible and contain hessiness. Others can be applied, but the most popular method is the neural network-based application.

A neural network is a network that can be constructed based on the connection of a series of nodes with each other. These nodes are similar to the various nodes present in the human brain or most popularly known as the neurons. These neurons are the critical and the smallest part of the human brain (Wadkar and N 2019). After the series of connections established between the different nodes or the neurons of a neural network, the overall network can be implemented for different operations.

Here in the above figure 2, the basic structure of an artificial neural network has been shown. This is the basic model for the overall development of the complete network. Clearly from the above figure, the model consists of two different layers. These are the input and the other is the output layer (Wang and L 2017).

As shown from the figure, there is a set of features which can be taken as the set of inputs to the overall network. The network generally operates based on the nature of the inputs that are coming to the network. The net signal that has been generated and shown in the above figure can be represented as below-

Finally, the output can be obtained as the function of the net signal represented by Yin.

This function is commonly known as the activation function. This function may be of different types like linear or nonlinear. Now, based on the operation and the function that has been used here for performing the activation and generating the signal that will be transmitted to the output.

Mainly the training of an ANN means the adaptation or updation of weights of the network. These weights are the associated factors that can be taken before giving the actual throughput to the overall system. These weights can be taken in the numerical numbers and can be considered aunty real numbers that can be associated with the input datasets before final entry to the network. In the above figure, the weights are denoted by the letter W and it can be represented by the matrix which can be presented in the below section-

The relation in the above can be treated as a matrix, and it can be formed as a square matrix or a rectangular matrix. The overall training performance mainly depends on the updating operation or the adaptation of the various weighting factors as shown in the above figure. It has been critically justified that the weight adaptation process is the main part of the overall training operation.

The main working principle of supervised learning is that, in this case, a set of training data sets is provided as the set of features or the inputs (Zhang and Q 2018). And the error is generated based on the perfect application of the overall process.

As shown in the above figure 3, the operation of the supervised neural network is totally based on the structure that has been considered here. Clearly shown in the above figure, there is a set of inputs that are coming to the input layer of the ANN considered. Now the problem is that the overall network structure may be any type, and that depends on the overall complexity of the operation and the technique of learning that will be applied for overall training of the network (Cao and S 2017).

There are many kinds of methods that are involved in the classification of the images. They are as follow-

Neural networks can be designed using many different steps. This is a process where the images are being divided into smaller segments. This is one of the most vital parts for this process. Input image is being identified by this method. This method also helps to calculate the actual size and shape of the image. Similar pixel images are being categorized in the process of this segmentation(Ju and M 2018 ).

2.2 Image classification based on neural network

The study of machine learning is a part of science. It deals with the study of a complex structure in such a way that the human brain works. “Biological neural networks” get impacted by the “artificial network”.

A neural network consists of many layers. It mainly consist of # layers. The name of those 3 layers are as follows-

In “neural network”, the term training refers to the “data level” information that is being collected (Sun and G.G 2019). All the information from the collective data is required to make a “machine learning” model. When any network that is being designed for an application is ready to learn. There are two different methods to train a network.

2.3 The back propagation training

Several steps are involved in the “back propagation” process. The term “propagation” means to transfer something in a given direction. The things that can be transferred to a particular direction are light, sound etc. These can be transferred to a particular direction. Transmission of data is the most important thing in this training method. Any kind of untrained networks are taken as immature networks (Wang and X 2017).

On the other hand, any network that is properly trained is known as a mature network. Basically this training acts as a messenger. The steps that are involved in “back propagation” training are- 1. Forward propagation, 2. Backward propagation and then by putting all values together and calculating the “weight value”.

Here in the above, a detailed study has been made regarding the image classification based on the proposed method. Now all these methods are implemented using the software MATLAB. All the results are presented in the below section-

After loading the image data into the software, the picture of the images is obtained as the output. Here the images that have been chosen are the images of the abdomens. These images are taken for performing the medical surgery(Haut and A 2018). Now the simulation results have been presented here-

As shown in the above figure, the picture consists of a total of three pictures of the abdomens. Now all these pictures are concatenated with each other to represent the images.

Now after loading the class 1 data for the images, the class 2 is also loaded, and the output of simulation is obtained as presented in the above.

As shown in the figure 8, the figure depicts the class 2 test images.

The results of the simulations can be presented in the below section-The overall network that has been considered here is the patternnet due to perform the classification operation as simply as possible. 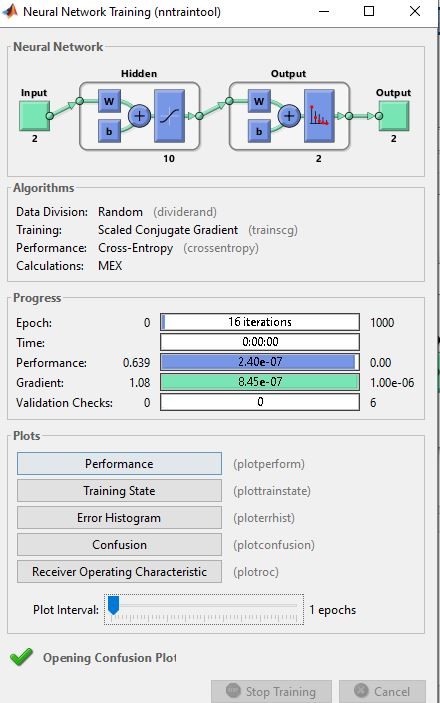 The platform of the training is shown in the above. This shows that the network takes a total of 16 iterations. 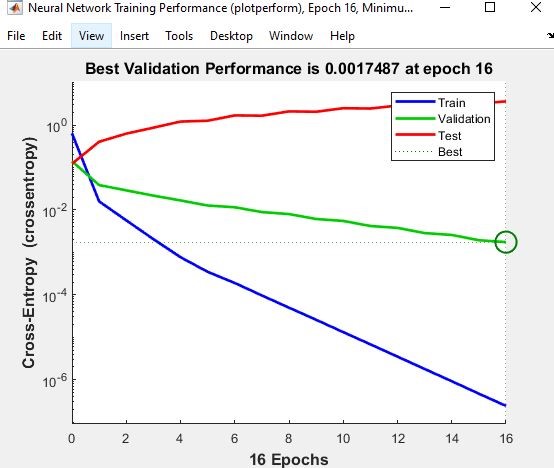 Performance is shown here that the validation meets the best performance. 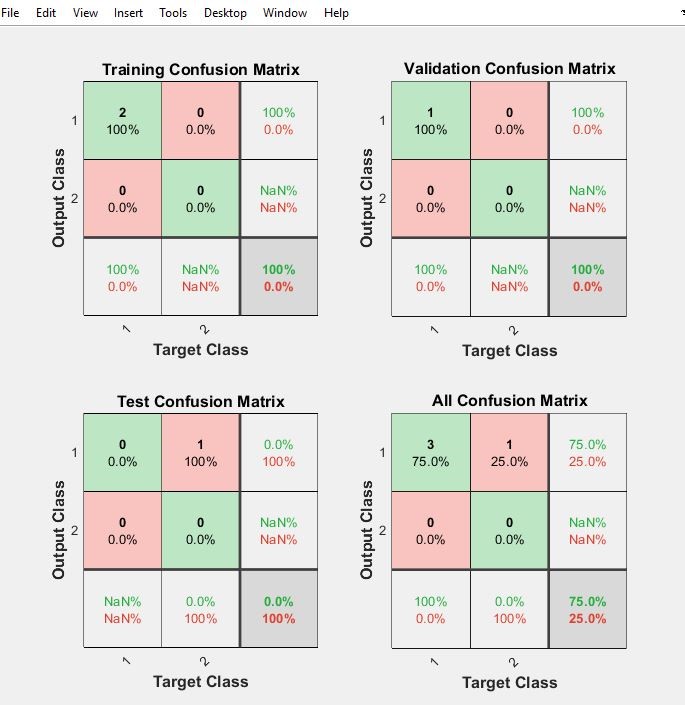 From the above test, the results that have been provided and talked about can be analyzed more to get a full idea to obtain a full classification of the data set. Pattern recognition problem has been discussed here. And this problem is completely based on the details of performance analysis and classification. As per the study, only two classes where choose that need to be done classification and in every class 4 images were taken.

Here in the analysis , the pattern recognition network has been considered to classify all the images(Mayannavar and V.M 2020). The most important criterion of classification that is chosen in this project was the color of the apples. The class separation that has been taken can be put as critically justified up to some point. In the main problem, there are two classes are considered for detail classification. Now in order to feed the images into the network for classification, they are to be coded into different numerical values.

As per the figure 10, the platform of the training is obtained where the well known training function is adopted for performing the training operation. Overall 16 iterations can achieve the desired result. The performance plot shown in figure 11 indicates that there are three parts. All these parts are obtained in the plot and the best point is achieved at the respective point.