Porsche is an aspirational brand within the global automotiveindustry focusing on providing exceptional quality products at high prices. As opined by Blazkova and Dvoulety(2017), the concept of price elasticity emphasizes the interconnection between the percentage changes in quantity demand to the percentage change in price. Due to the premium pricing of Porsche goods, it is highly classified as a luxury product, in that case, the price elasticity of Porsche is regarded as elastic hinting that the price elasticity is greater than one indicating high responsiveness to the changes in the prices.

As affirmed by Michis(2016), market concentration refers to the function of the numbers of the firms and their respective contribution to the total production operating within a particular market or industry. In the provided case, during the outbreak period,the high street prices of travel size sanitizer stood at £0.99, further hinting at greater demand of customers in relation to the impulsive purchasing trait. Besides, the trickling down prices further trigger the demand for the products thus, increasing the share of market concentration. On the contrary, after the outbreak the prices of hand sanitizer rose to £2.49, with higher costs the demand for the product within the potential market segment fell considerably thereby, decreasing the share and extent of market concentration.

A.) The formula for the estimation of Price Elasticity of Demand is mentioned below:

Increased the Price of Canned Soda = 10%

As affirmed by Longworth, Jongeneel, and Saatkamp(2019), producer surplus refers to the difference between how much the producers of the product are willing to accept for the given quantity of goods supplied versus how much they can receive by selling the goods at the market price. Besides, changes within the equilibrium price aredirectly associated with producer surplusother things being constant. Moreover, in equilibrium as the price of the commodity increases the potential producer surplusalso increases.In addition, the shift in the demand curve is directly related to the producer’s surplus, as the demand for the commodity increases, the producer’s surplusincreases. On the other hand, in the case of the supply curve, bothquantity supplied and producer surplus are directly related. In theprovided case the equilibrium price and the quantity of good X were $10 and 5 million pounds. Additionally, as a result of increased demand,the equilibrium price and the quantity of good X are $12 and 7 million pounds. Therefore if :

A.)Producers surplus increased from $12.5 million to $49 million, the increase in the producer’s surplus would further trigger the demand for the commodities thereby enhancing the share of quantity supplied with the market.

A.) Considering the Law of Demand, there exists an inverse interconnection between the price of the commodity and the quantity demandedprovided other things remain constant. Thus, the value of the price elasticity of demand is always negative as both price and quantity have an inverse relationto each other. Provided that the Price Elasticity of Demand for Football Match tickets is -0.50 if the prices of the tickets are further increased by 5% thenthe quantity demanded would fall by 0.025 times with respect to the rise.

B.) Provided that the price elasticity of demand is –1.12 if the expenditures of fried chicken increase to an extent this would further result in increasing the price of the products consequently leading to a drastic fall in the quantity demanded corresponding to theprovided price.

E.) Elastic demand refers to the scenario when the price of the goods and serviceshave a considerable impact on the consumers demand. However, two of the major reason associated with elastic demand are namely, the availability of substitutes and the proportion of income spent on a particular good. 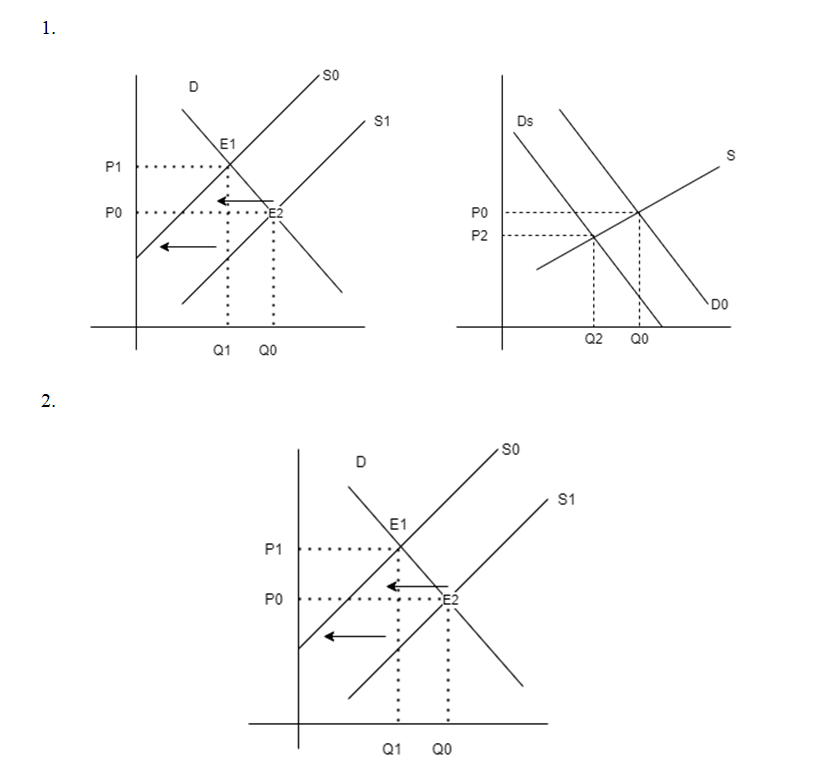 b.) The price the consumer pays for the subsidiary as per the figure provided below falls from P to P1

e.)The producer surplus is equivalent to the area of cross-section C – P unit

f.) Besides, the subsidy cost to the government is equivalent to CABP1.

g.)As a result of the total surplus within the market which is lower in the case of subsidy in the free market thus leading to economic inefficacies referred as dead weight loss.

a.The equilibrium price and quantity of ammunition in the free market lies in the intersection of the supply and demand curve

b.The new equilibrium price and quantity after imposing a quota on ammunition are E and F respectively

c.The area of consumer surplus before the quota is A and B

d.The area of consumer surplus after the quota is C

e.The area of producer surplus after the quota is E and C

f.The area of producer surplus after the quota is B and C

A.) Equilibrium price and quantity

On the other hand,

Plugging P = 7 into the supply curve

At Floor Price of $7 per bag

D1 indicates the demand curve at the initial stage from the particular process point of starting price-quantity adjustment. The demand volume has been decided by the consumers based on the current prices whereas the authority or the management produce item based on the price level. The equilibrium points are adjusted by the market itself in the short-run. The prices and demand have been adjusted to P* and Q* following the price mechanism. On the other hand, D2 refers to the demand curve of the long-term run and the price adjustment point has been initiated from a’. All of the factors are required to be added in the adjustment process by the producers in the long-run. The consumer behavior has been estimated based on identifying production costs. The production factors are considered as a variable where the company would adjust the output level along with attaining equilibrium in the market.

The demand amount and equilibrium price of wine are Qe and Pe respectively and E reflect the equilibrium. The consumer has to pay Pc and the manufacturer receive Ps where the amount of equilibrium has changed to Qs after subsidy imposition.

The new social welfare level is calculated as the additional value of triangle area of APeE, and EPeG.

The subsidizing policy of wine market has resulted in rising consumer surplus level. On the contrary, the subsidiary policy has also influenced the producer surplus level. However, the customers don’t provide the same value after subsidy imposition. The producers would receive the higher subsidy value in the same production cost. The deadweight loss is generated from subsidization(Wang et al. 2020).

Sales tax is considered as the imposed taxes on a particular service or product offered to the customer. The particular tax has impacted the demand-supply equilibrium after considering the leftward inclination of the initial equilibrium point. The product value has been increased and the demand volume has reduced simultaneously. The demand curve’s elasticity has influenced the changing demand(Alshirah et al. 2021). The liquor demand has been considered inelastic in comparison to rental video. The change amount demand for the liquor would be reduced than the rental video after the rise in the sales tax. The sales tax burden would be on the rental video owner rather than focusing on the owner of the liquor store. It is considered as the reason behind the proposed 1% increase in sales tax by rental store owners with compared to that of the liquor shop owner.

The taxes provided on the items that are imported would increase the expenses of foreign products in the domestic economy. The tariff decision on imports has impacted the domestic consumers as the prices have raised(Ahn and McQuoid, 2017). The tariff has raised the domestic goods’ prices where other substitute products minimize the consumer surplus. In the figure, A, B, C, and D are considered as the identified areas which comprise the loss in customer welfare. The producers would perform better because imported tariffs of foreign products have raised producer surplus levels in the domestic economy. The producer surplus gain is denoted as A.

For maximizing the profit level, Emma would produce 6 shawls per week.

So, the profit maximization decision of Emma would not change.

Blazkova, I. and Dvoulety, O., 2017. Is the price-cost margin affected by the market concentration? Evidence from the Czech food and beverages industry. Business and Economic Horizons, [online] 13(2), pp.256-269. Available at: <https://www.researchgate.net/publication/320501526_Is_the_price-cost_margin_affected_by_the_market_concentration_Evidence_from_the_Czech_food_and_beverages_industry> [Accessed 23 February 2021].