Stakeholders mean the people to whom the profitability of the company matters. There are two types of stakeholders available.

The internal stakeholders are employees, stakeholders and owners. The focus of the employees is to improve the financial and operational health of the company. The company operates through the third party retailer as well as their flagship store.

This company has its some principals such as its shareholders. Shareholders are the one who invested their money in our company.

The agents of the corporation are considered as the board of directors, Chief Executive Officers, Chief Financial Officer,other officers and some other persons, who are officially authorized to deal with the situations on its behalf.

Calculation of the profit of the firm:

From the above calculated ratios, it can be depicted that days inventory outstanding declined from 75.32 days in 2016 to 71.12 days in 2018 means the management efficiency of the company declined in managing the inventory and converting it into the sales. At the same time, days receivable outstandingalso declined from 2.71 days to 0.24 during this period as the firm have started to collect the payment from customers quickly to maintain the cash position. In addition, decline in pay outstanding period shows that the firm has reduced its time duration of paying to suppliers to maintain good relationship. At the same time, assets turnover shows that it has increased from 2.84 in 2016 to 3.01 in 2018 indicating the improving efficiency of the management to convert or utilize the assets to generate revenues. In addition, fixed asset turnover also increased showing the improvement in efficiency of the company to utilize the fixed assets to convert into sales. Overall, efficiency ratios show the improving efficiency of the management to utilize its resources to generate sales.

Based on the above calculated ratios, it can be analyzed that all the profitability ratios including gross profit margin, net profit margin, operating profit margin and return on equity ratio increased from year 2016 to year 2018. Regarding this, it can be depicted that the ability of the firm to keep the operating expenses to low has improved as firm has reduced the operations costs during this period that has improved the profits of the firm. At the same time, return on equity has increased from 24.48% to 40.04% showing the improved ability of the firm to generate sufficient returns for the shareholders. So, it can be stated that the firm is quite effective to generate profits or returns on investment made by the investors.

From the leverage ratio, it can be determined that how the firm uses the capital to finance its activities. Based on the calculated leverage ratios, it can be determined that company uses more equity than debt to enhance the creditworthiness in the future contingency. However, this ratio declined from 2016 to 2018 showing the more focus on the equity to finance its operational and investment activities. At the same time, the assets values are more than equity with declining pattern with some fluctuations showing the ability of the firm to pay shareholders with sufficient assets in downsizing or closure of the business.

Another important factor that influences the projects are the expansion and the replacement. The decision of expansion needs new market and new strategy of expansion. On the other hand, some loss making company wants to replace their projects.

In concern of taxation, it is analyzed that taxes play an important role in the organization as it creates the huge impact over the organization in concern of its financial decision making. At the same time, the most crucial objective of taxation is to raise the needed revenues in respect to meet the organizational expenditures. In addition, tax rates vary to the different countries and that is why, taxation has favorable as well as unfavorable effects on the distribution of income and wealth of an organization. Hallenstein operates business in NZ and Australia. The company tax rates vary as 28% in New Zealand and 30% in Australia. It means difference in tax rates may also impact the profitability of the company in different countries. When Hellenstein invests in different projects in other countries, when tax rate is higher, they will get less return and less cashflow from the project similar to AU subsidiary. For example, in New Zealand, the firm pays less tax as it enhances the returns and cash flows as compared to Australia. In this way, company has to pay the tax on their incomes which reduces the net profit of the company or profits attributed to the shareholders.

Internal stakeholders like fashion designers were interviewed. The questions are:-

Operation:How the Hallensteins brothers manage to stay according to the latest fashion trends?

Accounting: how does the accountant manage or handle the accounts of every Hallensteins store?

Sales and marketing: how do you promote your products or your store?

Human resources: what qualities do you look while hiring a new staff?

Risk management: how do you identify the risk and how do you mitigate it?

Students need to ensure that all the organizational policies and procedures are feasible as per the internal as well as external requirements of the business entity while accomplishing the process of decision making process and forecasting process clearly. A direct meeting was conducted by the student to the management to accomplish the decision making process and forecasting. At internal level, the student contacted with the employees and managers and ensured them about the privacy and confidentiality of their data which they provided. It was assured them that their information will be used only for the academic purpose and will not be disclosed to another party without their permission.

In addition, information provided in the documents and reports was not used for non-academic purpose and harming the reputation of the company in the market. There will no harm to the company and its members through this study as all the information given will be used only for completing the assignment given by the University.

For this, ethical policy or code of conduct of the company was considered as evidence at internal level that reflects the consideration of the ethics while studying (See: Appendix 3). At external level, Audit – Companies Act 1993 and Financial reporting act 2013 are complied during this study.

From the independent auditor’s report given by PWC, it is evaluated that the firm has complied with NZ IFRS and IFRS along with internal standards on auditing and ethical standards while reporting its transactions in the financial report.

The data analysis and research has been done to find out the information related to the company. The communication skills of the students have been applied at the time of questioning the stakeholders.

Manea, L., 2017. How to use financial statements within the global economic analysis trend. Internal Auditing and Risk Management, 45(1), pp.16-24. 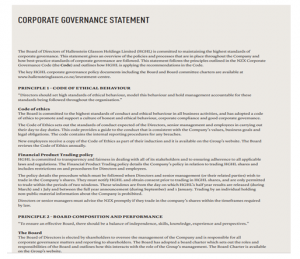 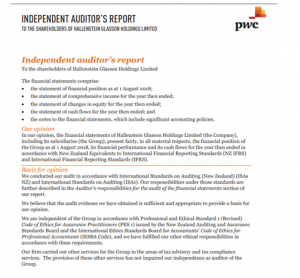