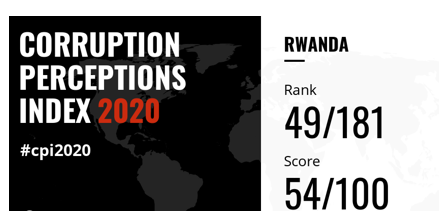 Evaluating the political issues in Rwanda

Political environment plays a crucial role in conducting business in any country and Rwanda is no exception to it where the political influences the business of the country to a considerable extent. On the other hand, it may be implied that the country is dominated by Rwanda Patriotic Front and other opposition parties, although exists yet do not have any real power in the country to make any significant change in the country (Gov.rw. 2021). In other words, it may be stated that the political condition of the country is not extremely suitable for businesses to flourish as the political environment of the county does not encourage a free decision-making process which may ultimately give rise to several interstate conflicts. However, it needs to be argued that any sort of fiscal crisis ultimately affects the economic growth of a country which results in ultimately reducing the competitiveness of the country to perform better in the global business context. On a contradictory note, it may be implied that the rapid economic growth has been observed in Rwanda which got reflected in the Gross Domestic Product (GDP) of the country per capita which had grown from $333 to $669 between 2000 and 2015 (Takeuchi, 2019).

In addition to this, it may be opined that Rwanda has performed well in the corruption perceptions index, where the country has scored 54 out of 100 and has become the least corrupt country in East Africa and the fourth least corrupt country in sub-Saharan Africa which became possible due to the active efforts in the political arena of the country (Transparency.org. 2021).

All these factors have contributed towards the wellbeing of the citizens of the country and corruption has also reduced to a great extent which is definitely a positive indication for businesses to grow in the future. In a more specific way, it needs to be asserted that the present political environment of the country has focused on globalisation as globalisation helps in achieving interdependence in the field of business where cross border transactions boost the economic condition profoundly. However, the existing political repression in Rwanda has affected the country in a negative way which has ultimately impacted the process of globalization of business where supply chain networks got affected badly due to various issues related to domestication of industries.

Moreover, it needs to be mentioned that the political condition of the country has impacted human resources to a great extent which has further impacted the various business practices to a great extent where trade activities got affected significantly. Furthermore, it may be stated that international business of Rwanda and the political environment are closely interlinked and are responsible for developing a self-sustaining economic system which may generate better outcomes in the future. Apart from this, it may be mentioned that the business model of a country reflects the political condition which becomes an essential factor in promoting business models and attracting foreign investors. On a broader note, the political condition of a country has a direct impact on the growth of business and Rwanda is no exception to it.

Analysing the economic issues of Rwanda

It may be opined that there are several economic issues of Rwanda and for that reason it is extremely difficult for the international companies to do business with the country. Additionally, if a country is not economically strong and stable then the country will not be able to enjoy the opportunities of globalization. On the other hand, there are four pillars of globalization such as trade, information, capital and people as those four pillars are closely associated with the economic condition of a country. It has been observed that due to the deadliest impact of the Covid-19 the Gross Domestic Product (GDP) growth of the country has dropped as in 2019 the annual GDP of the country was 10.356$ billion while in 2020 it was 10.334$ billion (Data.worldbank.org. 2021). Moreover, it may be argued that the GDP of the country has grown significantly in the past years even though due to Covid-19 it has dropped which created several economic issues in the country. Moreover, if the economic issues of the country may not be solved by the government then the foreign companies may not show any kind of interest to enter in the market of Rwanda. 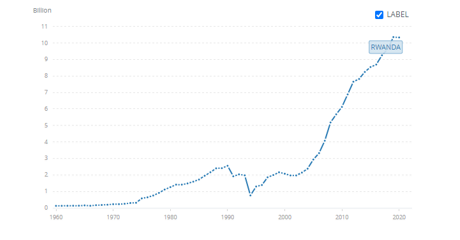 It is required to imply that if an overseas company will come to Rwanda to start a new business then it may experience multiple economic risks as the economic condition of the country is still not stable and suitable. On a special note, the government of the country has created no proper plan for protecting minority investors while if the investor will not get protection then the growth of the economy of the country will be disrupted. Moreover, the public sector of Rwanda also faced multiple difficulties and challenges in recent years due to massive debt of the government. It has been mentioned that the debt to GDP ratio of Rwanda is also increasing day by day as in 2019 the ratio was 56.7% which also increased by 71.3% of GDP in 2020 (Worldbank.org. 2021). Along with that, if the government of Rwanda will be able to decrease the debt in upcoming years then the economic stability if the country will be improved and it may create a suitable business environment for overseas companies.According to a trusted website the amount of outstanding purchases and loans of the country is around 270.34$ million in 2021 which indicates the huge amount of outstanding loans  not suitable for foreign companies to do business with Rwanda (Imf.org. 2021).

Discussing the social issues of Rwanda

It needs to be mentioned that the country of Rwanda has been facing several social issues as the government of the country has been carrying out various misconducts over the years causing great suffering to the people of Rwanda. The leading political party of Rwanda, known as the Rwandan Patriotic Front (RPF) has been involved in making several misconducts since it came in power and no opponent party in the country has the right to criticize the ruling party. It needs to be mentioned that those who have made any comments against the government have been mysteriously killed, gone missing or even subjected to imprisonment without any proper clarification from the government. Therefore, it may be stated that the Rwandan government has prevented people from practising basic human rights as an individual always has the right to speech and also has the authority to criticize the government based on a given situation.

On the other hand, it has also come to light that there is a significant prevalence of drug use amongst the youth of the country and the Rwandan government has not taken any relevant steps to mitigate the issue. It needs to be mentioned that the use of toxic substances, such as alcohol, marijuana and other forms of drugs is a real issue in the day-to-day lives of the youth of the country (Ncbi.nlm.nih.gov. 2021). Furthermore, the majority of the Rwandan citizens live in the rural areas and the availability of significant requirements for daily life, such as electricity, water and so on are still relevantly scarce in those areas of the country. In addition to that, many children in the country do not receive school level education in Rwanda and that is an extremely relevant social issue that the government of the country needs to look after with significant consideration. The healthcare infrastructure of the country is not also quite developed and many people do not even receive the basic health care due to that and especially in the rural areas of the country are in more need of better healthcare in Rwanda.

Along with that, police brutality in the country has also been a relevant social issue that the government has not taken any significant steps to resolve and many protesters and common citizens have also been a victim of it as well. It needs to be mentioned that two common citizens of Rwanda were killed by the Rwandan police for not abiding by the rules and regulations the government has set for restricting Covid-19 in the country. Corruption in the country has also seen a tremendous amount of increase in the country as several political leaders of the leading political party have been involved in several scandals and corruption. Social activists of the country have been making consecutive attempts and demanding justice for several social issues, such as the imprisonment of any individual of an opponent party and police brutality as well. The social issues of Rwanda have been the subject of many political and social debates over the world and the RPF has also been criticized and held accountable for several actions on the international platform.

The country of Rwanda is not an extremely prosperous country from the economic point of view and it needs to be mentioned that after the pandemic had hit the world, the country’s economic stability has decreased gradually, increasing Rwanda’s overall debt. Therefore, the government of this African country is struggling to manage the collective operational structure of the nation and that has become a matter of great concern as well. The country has been hit severely from an economic perspective by trying to manage the situation caused by the pandemic and getting all the residents vaccinated. The economic instability in the country has also caused the growth of private sectors to die down as well and that has also caused challenges for the Rwandan government to manage the country’s economic stability as well. It needs to be mentioned that Rwanda has extremely few natural resources and the country’s economy is fundamentally based upon just coffee and tea (Oecd.org. 2021). Along with that, the country has experienced several inconveniences in conducting international trade as well and the overall supply chain of Rwanda has also been disrupted, which has caused significant operational hazards for the country.

On the other hand, the Rwandan government has also failed to address several social as well as environmental issues as well in the country which has become a matter of national concern. The government of the country has not been able to address the concept of carbon emission with utmost consideration, significantly impacting climate change in a negative way. Therefore, restoring the integrity of the ecosystem would also assist in developing the potential to cope of the unprivileged in terms of Rwanda’s extreme vulnerability to catastrophes and climate change as well (Unep.org. 2021). In addition to that, the country is also struggling to create sufficient job opportunities for its people and increasing the overall income of the country, making it a significant national issue. It needs to be mentioned that the unemployment rate amongst the youth of Rwanda had elevated to 30.90% in the mid of 2021, which is a gradual increase from the first quarter of 2021 (Refer to Appendix 2). The gradual decrease in employment and increase of the labour force participation rate dropped significantly than the ratio of population to unemployment and the numbers  were 58.2% in August which decreased to 56.5% in November 2020 (Statistics.gov.rw. 2021).

Finally, it may be concluded that the country of Rwanda, similar to many other countries, faces several issues in terms of politics, economics and social as well and therefore, the government of the country is implementing several plans to mitigate the issues. 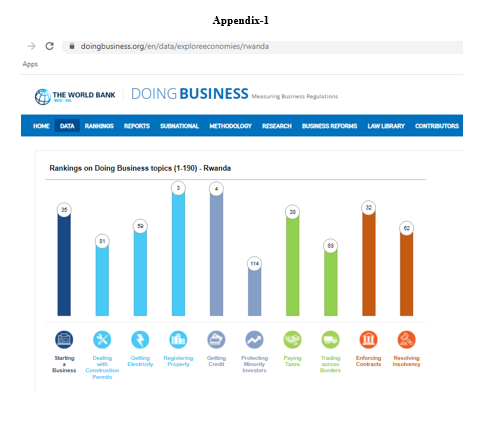 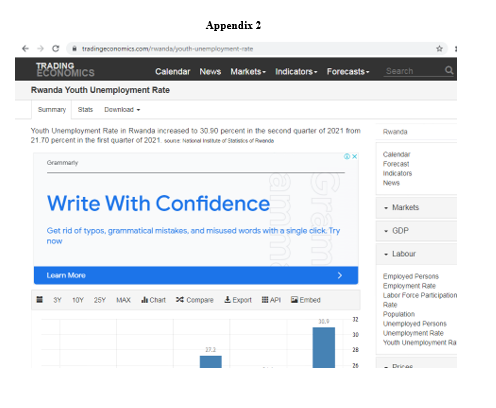