Here’s the best sample on Intercultural Competence in Business MAR013-1 Assignment written by the expert.

In this day and age of digitalization and globalization, business dealings have crossed geographical and political boundaries and enterprises from different parts of the world, with vastly differing cultures tending to get involved in business activities with each other. According to Hartley(2019, p. 45) thus it is now more important than ever to pay the required attention to the matter of intercultural competence concerning business communications. As the world keeps integrating, it is important to have mutual respect and reverence for each other so that offending the other party can be avoided.

The importance of properly understanding and appreciating the necessity of intercultural competence in modern business communication and activities cannot be understated. Successful business transactions with partners and associates belonging from a different culture and society demands that the individual has a proper insight and respect towards the other party’s culture, so as to not offend or belittle them in any manner. This is crucial for fruitful business communication which will be beneficial for the business overall. 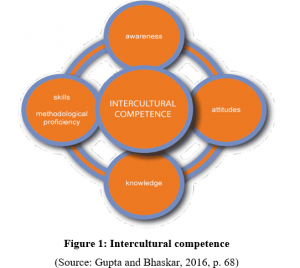 A particular case study is to be closely looked at in this assignment. As per the case study, a USA based sports equipment manufacturer has planned to enter a joint venture with a Japanese firm, given their interest in the game of golf. However, during the meeting the American representatives failed to demonstrate proper intercultural competence, hence the Japanese representatives took offence and the joint venture never came to fruition. It should be noted that the American never intended to offend the Japanese representatives, but did so due to their lack of knowledge about Japanese culture and intercultural competence.

2.1 Misstep of the American representatives

Japanese people, in general, take value etiquettes extremely seriously. According to Polyakovaet al.(2017, p. 179), this carries forward to their business meetings and proper formal etiquettes and protocols are absolutely necessary to be maintained. Although the Japanese culture seems to be quite rigid, they are quite forgiving to Western individuals given they demonstrate some respect and interest in understanding the culture.

2.2 Factors that can help in better understanding the cross-cultural issue

The American representatives of the sports equipment firm must realize that Japanese culture is extremely different from American culture. Certain gestures, which may be acceptable or even encouraged in America could be perceived as being offensive in Japan, who are usually more conservative by nature. Whenever in doubt, that smartest thing to do is to pay attention to the basic etiquettes and rules, as per Gowindasamy(2017, p. 170). Maintaining the proper dress code being formal and polite during the conversation are the cornerstones of intercultural competence and attention are to be paid to these aspects.

This particular theory was put forward by Gudykunst and aims to examine how the uncertainty and anxiety levels of individuals in social situations influence their communication process. As per Neuliep(2017, p. 6), this theory can be quite useful in analyzing this specific case. According to this theory, there must be a minimal amount of uncertainty and anxiety for there to exist a seamless, effective and rewarding intercultural communication. The theory makes the assumptions that the involved parties are strangers, which they are in this case. The Japanese representatives clearly faced uncertainty and anxiousness during the business meeting due to the actions of the Americans and this directly resulted in failure of association between the two. 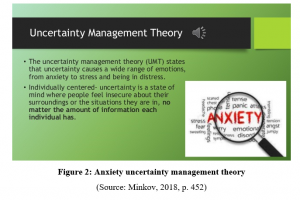 As per Richter et al.(2019, p. 2) the Hofstede Model is composed of six dimensions and they are-

This refers to the degree of inequality that is accepted between individuals and power in a culture or society. This can be an indicator for the way individuals of a certain culture perceive authority and hierarchy. Japanese culture tends to have a higher degree of PDI compared to its American counterpart, as per Tsalikis and Stephanie (2017, p. 366). Hence, Japanese culture tends to have more complex hierarchies, more gap between the supervisor and subordinate and more conservative nature in general.

Individualism takes a more central stage in the American culture while Japanese people tend to take collectivism more seriously. As a result, the Japanese representatives adhere more to traditional conventions.

Masculinity and femininity do not possess particular relevance to this specific case study. However, it should be noted that Japan has one of the highest gaps in value between the men and the women in the country

Countries with higher value of this dimension tend to be more conservative and they attempt to be in control much more, such as Japan, as per Nakayama and Martin(2017, p. 10). If they are unable to achieve this, the uncertainty level increases. On the other side of this index, the American representatives demonstrate that they are more open and flexible to changes. 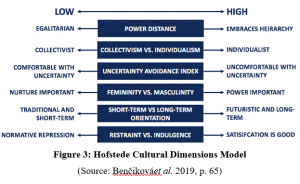 The American representatives should pay more attention to researching the culture of Japan and examine the various aspects that are considered to be appropriate or inappropriate. They should invest time and effort on gaining intercultural competence, which will be helpful for them in their business endeavors as well.

3. Contrast between the cultural frameworks

The cultural framework of the United States of America and Japan are extremely different from each other. First and foremost, the Japanese cultural framework is heavily based on the principles of politeness and formality, as per Stadler(2017, p. 448). America on the other hand is much more easy-going and prefers to be more informal if the situation allows. Attire is also quite important for Japanese people, especially during business activities. American culture, though taking business attire in a formal manner, still is not as rigid. Hierarchy is also much more crucial in the Japanese culture, where there is a higher degree of gap between supervisors and subordinates. This is also in contrast to the cultural framework of the USA.

4. Relevance of these frameworks in understanding interpersonal interactions in business situations

Examining and understanding the cultural frameworks of different countries and societies is critical to properly appreciate interpersonal and intercultural interactions in business communications. Had the representatives of the American company been aware of the cultural framework and its implications they may have been able to avoid any setbacks and establish the association, which would have benefited the business as well. Understanding and being knowledgeable about these frameworks will help the involved parties to incorporate gestures that may be appreciated while avoiding the ones that may cause offence. This will help companies to successfully conduct business communication via intercultural interactions and benefits the operations of the business. I will also help them in creating associations and partnerships from across the world without any hindrance.

Intercultural communication theories such as the anxiety uncertainty management theory and the Hofstede value orientation theory can prove to be hugely beneficial for business organizations in regard to their intercultural competency. According to Bencikovaet al.(2018, p. 30) as the models facilitate the understanding of where the American representative went wrong during their interaction with the Japanese representatives, they can be useful to gain crucial insights and derive suggestions on how to be intercultural competent. These models and theories can help the company be fluent in intercultural communications and not make mistakes such as doing something that may be offensive to a particular culture. It will also help the enterprise to better understand the culture of the foreign nations and societies to utilize the options and opportunities globalizations have brought to them.

It can be concluded that intercultural competencies for business enterprises are extremely crucial and should be taken sincerely by business and communication managers. In the case study, the representatives of the American company of sports equipment manufacturers could have entered a lucrative joint venture with the Japanese firm, due to their interest in the game of golf. However, due to some mistakes the joint venture never came to being and was a loss of a potential opportunity for the American firm. This was a result of a lack of understanding and appreciation for the Japanese culture on the part of the American representative. Intercultural competency could have eliminated these problems and helped the company in avoiding gestures that may appear offensive or derogatory in the Japanese culture. Despite their best interests, the Japanese representatives took the informal and over-friendly nature of the Americans as insincere and disrespectful.

Gowindasamy, M., 2017. A Case Study on the Implementation of Reflective Development Model in Improving Intercultural Competence among Business Student in Stamford College. Journal of Education and Practice, 8(12), pp.168-174.

Stadler, S.A., 2017. Which competence? A comparative analysis of culture-specific vs. culture-generic intercultural competence development. Advances in Economics and Business, 5, pp.448-455.