The BAA Heathrow Terminal 5 is one of the busiest terminals but over the years, there was issues and problems that has been presented with the terminal that forms basis of this study. The major set of problems in the terminal pertained to the technology issues that resulted in delays and misplacement of passenger luggage, thus causing a great deal of issue and brand image affection (Denicol 2020). As per the scientific and the business reports, the large-scale project of the British airways resulted in the development of the chaos and problems when the system’s failure took place in the airport, resulting in much bigger hazards. That is why, this case study for the risk management analysis, has been chosen in this study that is critical to understand as well. Due to this massive technological failure, almost as much as about 500 flights were cancelled and there was misplacement of about 23000 bags that is important to understand as well. And that is why, the financial risk mounted to as much as about 16 million pounds that is very important a figure to be noted. Even though a huge investment as made for the construction of the place, it was reported that on the day of information technology-oriented systems failure – many lifts were working only which could have helped the passengers to a great extent. As per the reports, in over two hundred and seventy-five of the lifts, almost twenty-eight of the lifts were out of order and the staffs at the BAA Heathrow Terminal 5 was clueless of the architecture and the technology infrastructure of the place where they were posted (Denicol, Davies and Pryke, 2021). Moreover, the technicians who were given the job of checking the specimens but due to complete system and applications failure, the baggage could not be moved through the system and there were many losses that happened as well, as mentioned above. In addition to this, there were the major complaints pertaining to delays in the construction, check up and security check processes which also caused more bigger problems and the issues that is critical to note. Moreover, as for a matter of fact, the staffs at different segments and professional areas of the terminal lacked the knowledge of the terminal that resulted in massive communication issues with the clients whom they could not help at all. It has been reported that almost about as much as twenty-three thousand bags were sorted on a manual basis that caused the delays to become cancellations. 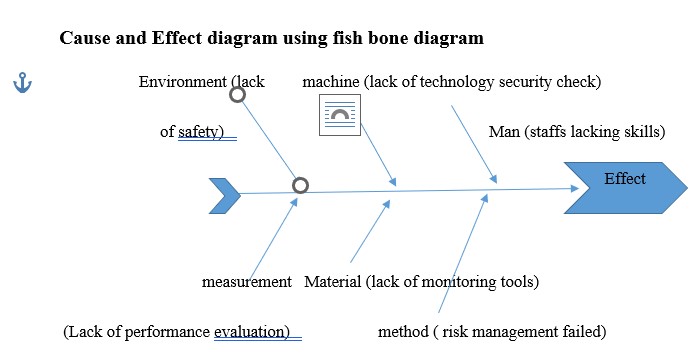 Thus, the four individual risks chosen in this case are the technological issues, communication and technological skills lacking risks as well as the operational risks. The lack of qualified information technology staff recruitment led to the technological failure and such a huge loss in terms of flights, finance and also the baggage. That is why, it is important to understand that this is the very first of the risks and the complications that caused the others to happen.

The human resources that are the staffs at the airport terminal lacked the communication skills and they could not even help the staffs with the lifts as well and this caused the seriousness of the issues, to escalate to great levels (Riazi et al. 2020).

Finally, it is to be noted that construction of the BAA Heathrow Terminal 5 was not complete at all, and this caused the serious levels of problems to be caused on the day of operation (Rickaby, Krystallis and Davies, 2018). The quality and the security checks were not done perfectly at all and that is why, the result was the total system failure at the airport terminal, on the day of the operations and loss of such big amount of money and large amount of baggage with such valuable properties.

The risk mitigation can be done by a lot of methods. At first, a sincere team of information technology professionals specialized at designing airport security systems is required. Secondly, automated gates and security checks will leave the important part to the machines which will be no error unlike the humans (Davies, MacAulay and Brady, 2019). Thirdly, the contractual management should have been done in a very legal manner in order to mitigate the risks of delays and lift failures when the airport is in full operation. Finally, training of the technicians and the ground staffs with the technical skills and the soft skills along with the right knowledge skills is required to help the passengers in the right, supportive manner which is important to understand as well. All these elements and strategies are critical to mitigate the risks that actually posed themselves at the very BAA Heathrow Terminal 5 that is important to note as well.

Thus, it can be concluded saying that there were many issues pertaining to the risk development at the airport terminal and the human as well as the technical factors were mainly responsible for the same. The cyber physical systems were not properly integrated there that caused the major threats to be caused as well.

Finally, the recommendation will be technology upgradation and installation of the quality management system at the airport terminal. The second recommendation will be regular training of the staffs for better management of the complaints and queries of the passengers that is needed. Finally, there is requirement for automated security system that will help the development of the right practices in prevention of these kind of risks, as mentioned above.

Rickaby, B., Krystallis, I. and Davies, A., 2018, December. Managing Uncertainty (opportunities and threats) in Megaprojects. International Research Network on Organizing by Projects (IRNOP).