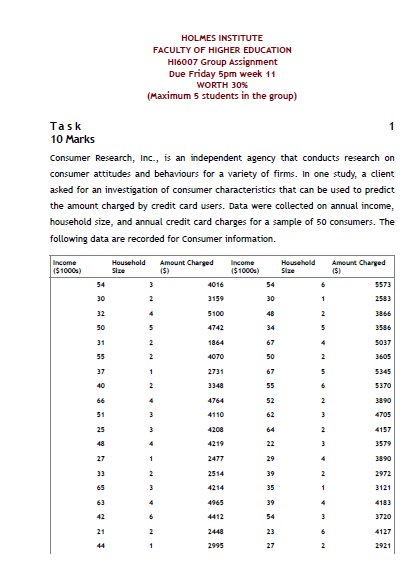 The below tables show the descriptive statistics for all variables:

At the same time, coefficient of variance is very high for income and amount charged by credit card users. In addition, values of kurtosis and skewness near to ±1 indicate consistency of the data distribution closed to the average of the data for each variable. The data for all variables shows acceptability for empirical use.

At the same time, correlation between variable can be determined as below:

Regression analysis for both variables indicates that household size variable is better predictor of annual credit card charges as compared to income. It is because R2 for variable income is 0.3978 means approx 40% of the variation in amount charged can be explained by annual income.

Meanwhile, On the other hand, R2 for household size variable is approx 0.57 implies about 57% of the variation in amount charged can be explained by household size.

The predicted annual credit card charge for a three-person household with an annual income of $40,000 is approx $3,699.

It is because youngsters and female consumers are likely to purchase more as it can increase the amount charged by credit card users. In addition, purchasing options including online and offline modes can be considered to determine buying patterns of customers.

From the above descriptive statistics, it can be interpreted that there is higher depression among normal individuals in New York in comparison of Florida and North Carolina.

In addition, individuals with a chronic health condition such as arthritis, hypertension, and/or heart ailment have similar depression level but high in all locations. But, people with chronic disease have higher depression in comparison of normal individuals.

No difference in the mean depression score of healthy people in all three locations.

µ1= the mean depression score of healthy people in Florida

Rejection Rule: The null hypothesis is rejected if, p-value ≤0.05)

Here, p value is less 0.05, so the null hypothesis is rejected. Therefore, the mean depression score of healthy people is significantly different in the three locations.

Here, p value is greater than 0.05 as the null hypothesis is accepted. The mean depression score of individuals with a chronic health condition is not significantly different in the three locations.

Based on the above analysis, it can be concluded that in test 1, the mean depression score related to locations because there are differences in score in each location. Individuals in New York possess high depression score as compared to other locations.

The mean depression score of individuals with chronic disease does not relate with locations as there is similarity in these scores for all locations.